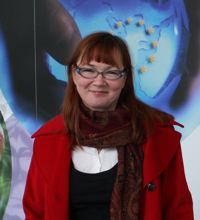 Ulla Vuorio from STUK, the Finnish Radiation and Nuclear Safety Authority, is now working as a seconded national expert in the small town of Petten in the Netherlands. She is a Scientific Officer at the Joint Research Centre Institute for Energy, a unit providing scientific and technical support on energy issues to the policy makers of the European Union. Her daily research field is safety of present nuclear reactors. Ulla has a solid background in nuclear safety, which she proved in her presentation of Probabilistic Safety Analysis at the 2010 KIKA NCS seminar.

“My devotion to energy is not very strange. I grew up in the southern part of Finnish Lapland, where a lot of the Finnish hydropower energy is produced. Later on, because of my father’s work in the energy field our family moved down to the south of Finland to the construction site of the Loviisa nuclear power plant, and I got interested in the business”, Ulla Vuorio says. Ulla studied energy technology and graduated as an engineer with special emphasis on nuclear power engineering at the University of Technology in Lappeenranta.

“I spent a lot of time training at Loviisa NPP and I got familiar with the operation, maintenance and fuel handling process of the plant. After my training periods I was later employed by Fortum (previously IVO), which meant a move to Helsinki, where I made my diploma work on the behaviour of nuclear fuel for Loviisa NPP. Later on I was involved in pressure vessel thermal shock analysis and probabilistic safety assessments for Loviisa NPP, and implementation of safety improvements, many of which were introduced by our team in Nuclear Engineering Department. Moreover, I participated in the expertise and consultancy services of the company in the field of safety improvements and process design for the Russian NPPs ”

The downturn of the nuclear power investments in the early nineties as a consequence of a ban decision regarding new nuclear power plants by the Finnish parliament lead to a more international career for Ulla. Between 1994 and 1998 Ulla worked as a project manager in the Environmental Business Unit at Fortum.

“During that period I specialised in environmental projects related to flue gas cleaning technology for coal-fired power plants in the Czech Republic, Poland and Finland”. Later on Ulla got more and more involved in international development and energy cooperation. She worked for the Nordic Council of Ministers and Finnish Government.  “From 1999 I involved myself in bilateral, Nordic and EC energy and environmentally sound projects in the Barents and Baltic Sea regions. The objective of these projects was to promote the use of renewable energy and to increase the efficiency in energy production.”

But, then nuclear things started to move in Finland.

“Along with the Olkiluoto 3 project, STUK (The Finnish Radiation and Nuclear Safety Authority) recruited me to work with safety issues of both operating and new nuclear power plants. Among my other tasks in the Risk Assessment Group of Nuclear Reactor Regulation Department of STUK, I was in charge for the work with an updated version of the regulatory guide (YVL 5.8) for lifting devices and operations in nuclear facilities. The Finnish version of the updated guide was issued in 2008. .”

In Finland the Regulatory Guide overrules the other standards.

“We did not tie up the hoist and lift owners to certain norms and standards. The applications are liberal as long as the safety requirements are fulfilled.”

In summer 2008 Ulla entered a completely new international environment as she was appointed as a seconded national expert to the post of Scientific Officer at the Institute of Energy in the Netherlands, a Joint Research Centre within the EU international cooperation scheme.

“At the institute, in the context of “Clearinghouse Action” we are aiming at promoting operational experience feedback (OEF) of nuclear power plants and enhancing event reporting processes. The project, initiated by the General Director of STUK, is an action of the European Nuclear Safety authorities in co-operation of the International Atomic Energy Agency (IAEA) for a more efficient and quicker dissemination of and learning from operational experience feedback of nuclear plant events. The working environment in the Institute for Energy is very international covering almost every European country. In this specific project for OEF of the IE, I am the only Nordic researcher.”

As a conclusion of the KIKA NCS seminar Ulla thinks that there is an advantage to harmonise the standards of nuclear cranes and fuel handling equipment.