Summary and Brief of Presentations

Success never comes alone …
The first Nuclear Cranes Seminar, arranged by KIKA in 2008, was a positive experience with 60 participants from Europe and North America.
Now 87 lifting and handling specialists from nuclear power plants and responsible authorities plus a number of suppliers from three
continents gathered in the stylish Christina Nilsson Hall in Swedish Växjö, not to listen to the famous songbird, but to meet
colleagues and to learn more about how to increase safety and reliability in nuclear installations. 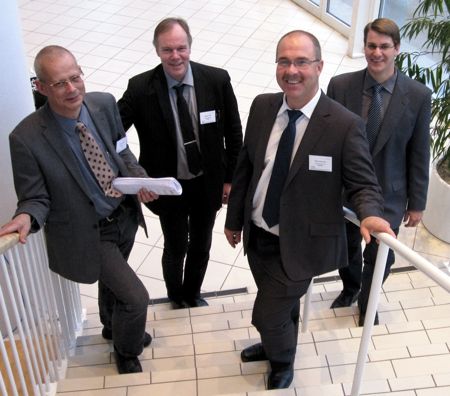 The duo Kjell Andersson and Thomas Krüger, two of the forces behind the KIKA NCS Seminar 2010,
entered the scene exactly on time to start the seminar. KIKA is a member network for users of cranes and other
lifting and material handling equipment in the Nordic countries Sweden and Finland. Since the foundation in
1999 KIKA has played an active part in both national and international connections.
The association has been very active in fields like competence development, implementation of standards and exchange of
experience in order to promote safety and availability.
Peter Ohlsson, Chairman of KIKA, briefly reminded the audience about the previous seminar in 2008 and the goals of
the association. The KIKA committee members Thomas Hagman of Vattenfall Ringhals AB and Johan Dagnäs of Eon
OKG AB should also be honoured for their work during the preparations of the 2010 seminar.

WANO, World Association of Nuclear Operators was formed in 1989 to enhance international cooperation between the
operators after the Chernobyl accident in 1986. JeanMarc Willemenot from the Paris office of WANO had four themes
on his agenda: Why SOER (Significant Operating Experience Reports)? Analysis of events 2007-2010,
Improvement initiatives in Nuclear Power Plants and Recommendations from WANO.

“We should fight against the thoughts of ‘impossible accidents’!”

“We should have a holistic approach, combine different individual sources of failure to maximise safety” 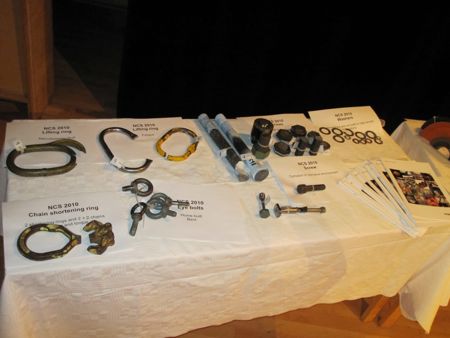 PaR Nuclear Ederer Cranes is a division of the US Group Westinghouse.
Jim Nelson is the company’s Crane Business Development Manager and he gave the audience a detailed description of
upgrading of cranes in nuclear plants.

“NRC guidelines do not address the public and programmatic consequences of a dropped load; those are left to the nuclear power industry itself.”

Eiffel is a familiar name all over the world thanks to the genius of Gustave
Eiffel and his unique tower, built 1889 in Paris. The company still exists as a part of the
Eiffage Group with 71 000 employees all over the world. Hervé Pasquiet and Khaled Sabbagh came
from France to tell the NCS delegates about modernization of lifting and handling equipment in nuclear power plants.

“One trend dominates; the safety level is always increased for every generation of cranes.”

NKM Noell Special Cranes is a German nuclear crane manufacturer, which is a part of the French REEL Group. In Växjö Stefan Popp and Uwe Fischlein described a crane modernisation at the Swiss nuclear power plant KKB Beznau.
Beznau consists of two PWR reactors delivered by Westinghouse in 1969 and 1971

“There are no mandatory rules or regulatory scheme in Switzerland, only an obligation to get approval from the authorities. We have applied KTA voluntarily”

After an evening with German dance music from ages gone by and a massive liquid balancing after eight hours of more or less dry theory, the participants of KIKA NCS 2010 woke up to an earthquake theme. 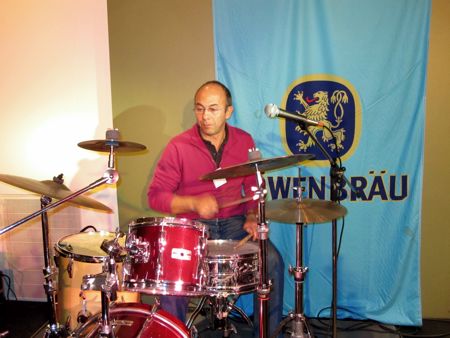 JNES is short for Japan Nuclear Energy Safety Organisation, established in 2003. Masakatsu Inagaki is Senior Researcher at the Seismic Safety Division, part of the Seismic Test and Research Group. (See separate interview!). He has investigated the effects of seismic activities on nuclear lifting and handling equipment in form of a seismic capacity test of an overhead crane under horizontal and vertical excitation. The reason for the test is a damaged driving shaft coupling in a Japanese reactor in July 2007.

“In Japan we have seismic events every day and they are reported on TV like the weather forecasts.” 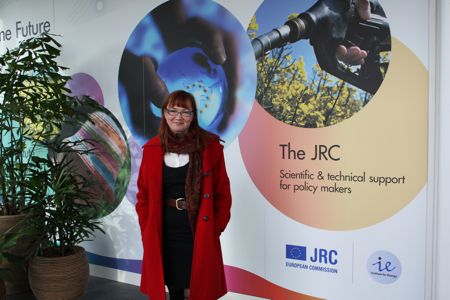 Ulla Vuorio represented two different employers at the KIKA NCS 2010 seminar. She has been working with crane regulatory rules at STUK (The Finnish Radiation and Nuclear Safety Authority) but at present she is living in the Netherlands, working at the EC Joint Research Centre Institute for Energy in Petten. (See separate interview!) Her theme, “Probabilistic Safety Analysis for Nuclear Cranes” is hot stuff among the owner, operators and suppliers of lifting and hoisting equipment. The theoretical basis for evaluating the risks and the technical life span of cranes is depending on many factors; the crane is a complex unit consisting of mechanical structures, runways and rails, instrumentations and sensors, electrical wiring and devices and other hydraulic and pneumatic systems.

“Identification of risks and weaknesses in design should be made in an early stage. Evaluate also all near misses to find the real reasons, design, manufacturing or operational mistakes!”

Jack Wray was the Grand Old Man at KIKA NCS 2010. He is running an independent consultancy company after a long career as a hoisting and material handling specialist for British ports. Today Jack is chairman of the ISO/TC96 Committee (Cranes) and CEN/TC 147 (Cranes-Safety). He admitted not to be a nuclear crane specialist, but as an ‘outsider’ he brought in fresh views.
There is a number of principal standards making bodies, on an international level ISO, IEC (International Electrotechnical Commission), ITU, CEN, FEM. In addition there are national standards bodies, e g. AFNOR; ANSI, DIN, BSI.
CEN is based in Brussels and the members are National Standards Bodies of the member countries of EU. CEN shall provide harmonized standards that support European Directives.
If a manufacturer follows a harmonized European standard he benefits from a “presumption of conformity” to the directive.

“Do we really need more detailed standards for nuclear cranes, offshore use or ATEX environment? The question is open.”

Bel V is the Belgian Technical Safety Organisation cooperating closely with the Safety Authority FANC as parts of the regulatory body, while Tractebel Engineering is a licensee partner, belonging to the GDF Suez Group. Sébastien De Grève of Bel V described the process of Safety Assessment of Nuclear Cranes, while Xavier Feyt focused on Safety Review of Nuclear Cranes. (See a separate interview with Sébastien on the post seminar of regulations!)

SDG:
Belgium has 7 PWR nuclear power plants, owned and operated by Electrabel GDF Suez
The rules are based on American USNRC with some deviations, both relaxations and amendments.
Periodic safety reviews (10 years), evaluation of the conformity of nuclear cranes with current standards.
Deisgn rules, NBN 159 (Belgian), Branch technical Position ASB 9-1, for overhead handling systems for nuclear power plants and regulatory guide 1.104, overhead crane handling systems.
There are two current assessments, one for light loads and the other for heavy loads. A heavy load is defined as handled for example by the polar crane. The risks are divided into risk of radioactive release and classical risks.
The assessment of load handling systems was not considered as a priority matter until recently. Electrical control components are becoming outdated. Ageing, fatigue and wear problems occur.
Bel V asks for improvement of documentation and procedures in accordance with practice.
SFP cranes not in conformity with the design basis. Some heavy load cranes are not, and will never become SFP cranes in the sense of NUREG-0554.
On-going discussion in Belgium regarding software and seismic qualification

“There are significant deviations between documentation and practice, maybe due to lack of clear and complete rules.”

XF:
In Belgium a list and comparison has been made of all standard regulations applied for nuclear cranes. NUREG-0554 and appendix C of NUREG-612 chosen as reference standard.
If deviation identified between construction standard used and the reference standard, action should be proposed to meet the requirements of the reference standard applied.
Some examples of actions taken: Emergency stop for crane in case of earthquake, located at ground level. Dual design for gearbox if it is located between safety brake and drum. Braking capacity should not be able to cause extra damage. Motor torque to be limited to the minimum required to hoist the load.
Structural integrity recommended for seismic qualification, specific requirements for software controlled protections.
Unclear which the stopping distance should be according to standards, loaded/unloaded, with one/two brakes?
Design safety factor: 2 or 3 times the load for redundant parts.

“Overall documentation needs to be improved with clear regulatory references”

Inspecta Sweden is a part of the international inspection, testing and certification group Inspecta. Reine Bladh is Senior Industrial Surveyor at the Växjö office. He gave a stunned audience some proofs of the findings he and his colleagues have made when they checked electrical designs. But, first a review of EN ISO 13894-1, Safety-related parts of control systems, with special emphasis on which performance level should be demanded on nuclear cranes.
The performance level is a discrete level of control systems to perform a safety function.
There are five performance levels, from a to e. They shall be determined by estimation of MTTFd (Mean Time To Dangerous Failure), five categories (B,1,2,3,4) and diagnostic coverage.
Other factors to consider are the behaviour of the safety function under fault condition(s), any systematic failure, the software and the ability to perform a safety function under the expected environmental conditions.
For example, category B means that a fault can lead to the loss of the safety function, while category 4 means that when a single fault occurs, the safety function is always performed. Detection of accumulated faults reduces the probability of the loss of the safety function (high diagnostic coverage).
Diagnostic coverage is a measure of the effectiveness of diagnostics = failure rate of detected DF/failure rate of total DF. (DF = Detected Dangerous Failures)
Low MTTFd is estimated for a time period of 3-10 years, medium to 10-30 years and high from 30 to 100 years. Due to interaction between the factors the final PL value can be considerably lower than the value of single factors.
Safety related parts of control systems shall fulfil the following requirements for PL: standard service cranes/class 3, PL c, cranes class 2 (reactor cranes), category 3, PL d and cranes class 1, PL e. Special consideration shall be taken to wireless and PLC controlled cranes.
The new German KTA 3902 proposal demands PL class e for reactor and fuel cranes, class d for overhead cranes and for other handling cranes class d.

“In cases where the human or economic consequences of failure are exceptionally severe (e g. nuclear cranes) increased reliability is obtained by applying a specified risk coefficient.”

Peter Ohlsson is the Chairman of KIKA. He is also responsible for all lifting equipment at SKB
(The Swedish Nuclear Fuel and Waste Management Co). Peter ended the presentations by telling the international participants
about the handling processes of fuel waste in Sweden.

“The trial operation of the complete process will start in 2025 and regular operations in 2027.”